We recently signed a letter pushing back against UK government plans to introduce “competitiveness” as a statutory objective for financial regulators. The letter was co-signed by a number of eminent economists from around the world. And the issue has global ramifications, since the UK hosts arguably the world’s biggest international financial centre.

Our letter unpacked the nonsense, fallacies and woolly thinking at the heart of this competitiveness agenda, and it argued that it is essential to replace “competitiveness” with objectives that “promote economy-wide productivity, growth and market integrity, and also protect consumers and taxpayers, advance the fight against climate change, and tackle dirty money to protect our collective security.”

We are delighted to see this, then, in the Financial Times this morning, describing a new report by the influential Treasury Select Committee. 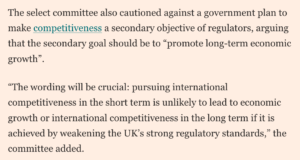 This is exactly in line with what we have been pushing for, and the TSC report referred directly to and quoted severally from our letter – and also an earlier broader civil society statement that we also signed. We believe that our intervention has had major impact in changing minds. We aren’t there yet – let’s see what ends up in the final legislation – but this is about as influential and positive an intervention as we could hope for.

Competitiveness sounds great, but the letter explain why it is so very harmful. And a recent edition of our newsletter, The Counterbalance, explains why these principles apply far beyond financial regulation into many other areas, including tax policy, climate policy – and, of course, competition policy.

The UK is deregulating its financial sector again